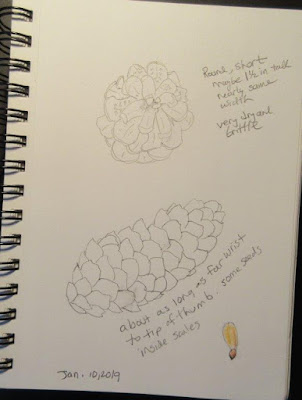 The other day I wanted to look closer at pine cones. It was pretty cold, so I brought them inside. As with the weeds, when I began drawing them I slowed down. Looked more closely at the scales. The one on top, short and rounder, was older. The scales more worn and brittle. The other had seeds tucked inside some of the scales.


Why don't we just take a camera, you ask?

I did... and discovered that I see more when I draw. For example, the imperfect shapes of scales, and how some of them were notched. The way the colors fade on the wing of the seed. How the spiral isn't perfect...
Posted by Sue Heavenrich at 12:30 AM
Email ThisBlogThis!Share to TwitterShare to FacebookShare to Pinterest
Labels: adventures, nature journal, pine cones, seasonal observations, Wednesday Explorers Club