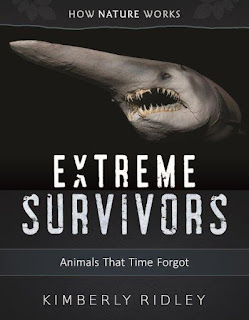 They're prowling around the planet now ... prehistoric beasts whose ancestors survived the catastrophes that wiped out the dinosaurs. Don't look now, but one might be lurking in your backyard...

That's an introduction that grabs your attention! Prehistoric beasts in the backyard? Absolutely. Also in the ocean, on the beach, sliming across a jungle floor. In the pages of this book, Kimberly Ridley introduces readers to ten creatures that have survived the centuries: the toothy goblin shark, the spiky tuatara, horseshoe crabs, tardigrades, and more. And she reveals their survival secrets.

Running throughout the book is a conversation about evolution - the gradual change in organisms over generations. Organisms that are better adapted to their environment tend to be preserved through later generations, Ridley explains. She provides examples of natural selection in action and discusses advantages of certain adaptations. Like the comb jellies that, more than 550 million years ago, were among the first animals to evolve skin and muscles. Even more important than having a primitive "brain", these animals had an anus - so food could go in one end of their digestive system and be excreted out their rear end. This adaptation allowed digestive tracts to develop, further allowing evolution of larger animals. Pretty cool, huh!

Of course there is Back Matter! More info on extreme discoveries, and a couple of nicely illustrated timelines plus quick facts on every animal: how big it is, what it eats, what eats it, when it appeared on earth. And for kids who want to dive deeper into the topic, Ridley provides a list of books and websites.

I caught up with Kim on the phone a couple weeks ago and she graciously answered Three Questions about Extreme Survivors.
Archimedes: You have worked as a science journalist, writing for Boston Globe and other publications. What did journalism teach you about writing books for children?

Kim: Storytelling and distillation. Writing about science is all about telling the stories. Then I have to figure out how to make complex facts and information interesting, entertaining, and fun while keeping it accurate. I look for ways to use engaging language that bring the story to life without anthropomorphizing.

Archimedes: How did you choose the creatures for this book?

Kim: After doing research, I had a list of 20 animals. So I made a huge chart on the wall - a timeline where I posted notes and facts. Then it was a process of elimination. I wanted the animals to be surprising, animals people might not have heard about. (so nix the cockroaches) I also wanted to show a fossil where I could. And I wanted to feature animals that were the focus of fascinating research.

Archimedes: Evolution seems to be a thread connecting all these different animals.

Kim: Absolutely. I wanted to put evolution front and center in the book. It is the basis for teaching life sciences, and an important topic in the Next Generation Science Standards. The point about these animals (extreme survivors) is that, while they may look similar to their ancestors, all organisms have evolved in some way. Over time, environment exerts pressure on animals, and those that survive are the best adapted.

Thank you, Kim! To learn more about Kimberly Ridley and her books, check out her website. She was featured on the GROG blog earlier this week where she talks about writing for a small press.

Today we're joining the STEM Friday roundup.   On any other Friday we'd be joining others over at Perfect Picture Book Friday, but it's summer vacation. PPBF will resume in September, but you can always head over to Susanna Hill's ever-growing list of Perfect Picture Books. Review copy from publishers.
Posted by Sue Heavenrich at 12:30 AM
Email ThisBlogThis!Share to TwitterShare to FacebookShare to Pinterest
Labels: animal adaptations, author interview, evolution, fossils