Ants and Spiders! Oh my!

Spiders and ants are becoming more active around – and sometimes in – my house. So this is a perfect time to share these books that were released last fall. 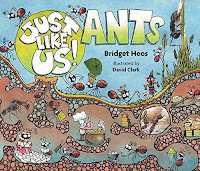 Did you know that ants have been farming for longer than humans? And that in addition to raising crops, they herd (and milk) animals? Ants also build roads, sew, and construct rafts to survive floods.

What I like about this book: On each spread, Bridget Heos introduces a different way in which ants are like us. She uses plain language, tinged with humor, to show how ants live in communities, delegate chores, and deal with traffic. An ant’s first job is often that of a babysitter – just like us! Babysitter ants feed their young charges, and give them baths. They’d probably raid the fridge if ant nests had refrigerators. Another thing ants do is wage war on other colonies. Meanwhile, the queen and loyal helpers carry the larvae and flee to safety.

I also like the artwork. David Clark’s cartoonish illustrations add a touch of humor while showing the details we need to know. Occasionally he integrates photos of real ants doing real work. 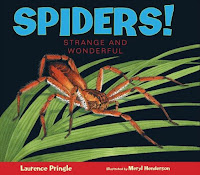 …there may be several spiders close to you. One may lurk under a chair. Another hides in the corner of a window. Oh, and there may be one in a little silk web, up by the ceiling.

Spiders live everywhere, except Antarctica, and they are so focused on living their own lives that they really don’t want to have anything to do with us. They have lived on this earth for a long time – at least 380 million years. Most of them survive by eating insects. That’s good for gardeners who don’t like pests nibbling spinach leaves; not so good for the pests.

What I like about this book: Laurence Pringle explains how spiders are related to other arachnids, shows their anatomy, and talks about their secret weapon. He introduces different kinds of webs, and spiders that don’t have webs. The illustrations are a wonderful way to learn how to identify certain spiders. I love the up-close portraits of spider faces and eye patterns – it’s hard to see those on live spiders. Back matter includes a glossary, further reading and, of course, websites!

Beyond the Books
What do ants in your area like to eat? Some ants prefer grease, some sugary treats, and others would rather nosh on seeds. If you find an ant community in your yard or local park, you can do a food preference test. Turn a paper plate upside down and put it on the ground about a yard from the ant’s home. Put samples of various foods around the edge of the plate: sesame seeds, barley, dabs of honey, butter, and peanut butter. Which food attracts the ants?

Check out this video of ants, by David Attenborough (Life in theUndergrowth, BBC)

Can you jump as far as a jumping spider? They can jump anywhere from 10 to 50 times their body length. Measure your height (body length). Then do some jumps, and measure how far you went. How far would a jumping spider jump if it were as big as you?


Scientists have taught a spider to jump on demand. They hope that what they learn from their spider, Kim, can help them improve the form and function of jumping micro-robots. You can watch the video here.