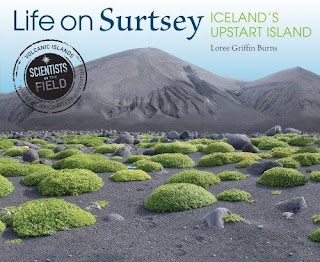 Last week I shared a book about a long, deep hole in the ground - the Grand Canyon - featuring ancient rocks from millions of years ago. Geology, though, isn't just about old rocks.

This week's book features younger stone, rock, and land forms: an island born on November 14, 1963 from the eruption of a volcano. In the ocean. Off the coast of Iceland.

"For the people who live in Iceland and the kids who grow up here, ice and fire just aren't that unusual," writes Loree Burns. But for everyone else around the world, this was big news. A new island! Scientists were eager to explore it - as soon as it cooled off enough to step foot on.

In this book,  Burns invites us on an adventure of exploration to the shores of an island now just over 50 years old. We meet some of the scientists who have been studying Surtsey since before she was a teenager. Erling Olafsson is one of those scientists who has been keeping an eye on the island's development since the summer of 1970. That was when he joined a small crew to study plants and other life on the island. They found insects, seagulls, plants...things that flew or floated to Surtsey's shores and made a life for themselves.

Through the pages, we join the 2015 expedition and watch scientists at work in the field. They set pitfall traps for insects, and sweep the grasses for flying bugs. Since the island was born, gulls have changed the soil, making it more suitable for plants. Seeds and insects have hitched rides to the island, and life has taken hold. The work is methodical, and it pays off: they find new species of insects!

What I like about this book: it's a marvelous adventure! The photos are gorgeous. In addition to plants, insects, and bird life, Loree introduces us to Icelandic culture, and the alphabet. The back matter is a rich resource, and she includes a section about other recently formed volcanic islands.

Check out this cool video of Surtsey.