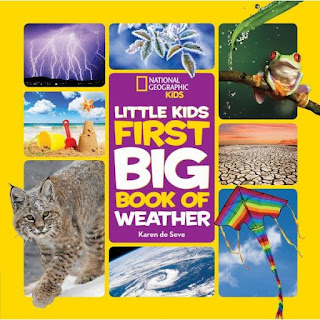 I like this book because it is so browsable. Sure, it's divided into chapters. In fact there are seven of them, including a chapter focusing on hot weather, one focusing on windy weather, one on cold weather, and one on rainy weather. There's a chapter devoted to clouds and one that explains how scientists study the weather (so we know what's headed our way).

But here's the thing: you can just flip through until something catches your eye - like the photo of an ice-encrusted car or the very cool photo that captures a raindrop splattering apart on a flower petal. Reading stuff on that page will make a kid want to dive in deeper, find out more.

There are also plenty of pop-up facts (aka: textboxes) and questions that encourage conversations on the topic... like the last time you chased after a piece of paper blown away by the wind (or maybe it was a hat). There are games and mazes at the end of chapters and a great "parent's" section at the back with more activities for curious kids. 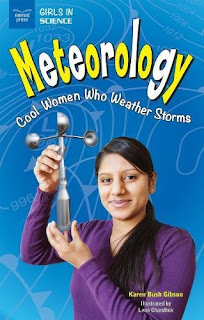 This is another great title in the Girls in Science series. But here's the cool thing: you don't have to be a girl to read it. Sure, it focuses on three women who conduct weather science, and yes, there are lots of short biographies of even more women in meteorology...
But the first two chapters introduce the science of meteorology and why it is important.

Regardless of your gender, weather affects your life. As we've seen over the past year, severe storms have a tremendous impact on towns and cities, destroying homes and encouraging some people to move to a new place. And when you're in the path of a storm, those forecasts are important.

Bianca Hernandez is one of the scientists profiled. She tells about storm-chasing and dropwindsondes, which are released from aircraft and collect data as they parachute towards the ground. You'll also learn about phased-array radar and other technology used by weather scientists. There's also a great discussion on the difference between weather and climate, and the relationship between climate change and weather.

Posted by Sue Heavenrich at 12:30 AM
Email ThisBlogThis!Share to TwitterShare to FacebookShare to Pinterest
Labels: scientists, weather