We’re on day 8 of the Blog Tour for Two Truths and a Lie. Thanks for dropping by to play… 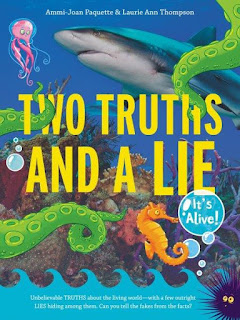 When a nonfiction book begins with a warning that some of the stories included are not true – you know it’s going to be a wild read. The thing is, the authors point out, there are lies all around us. Truths, too. Anyone trying to keep up with political news knows that sorting fact from fiction is really important.

But lies aren’t partial to politics; you’ll find plenty of shady stories masquerading as scientific truths. Like stories about a fungus that infects insects and takes over their brains, creating bug zombies. Oops – that IS a true story.

What Laurie and Ammi-Joan (who likes to go by Joan) do in their book is play a game with readers. They present three wacky science stories and challenge you to figure out which one is fake. For example, one group of three animal stories features a chicken who lived without its head – and performed in a circus sideshow, a cave-dwelling salamander that looks like a dragon, and a tree-dwelling octopod that lives in rainforests.

Which two are true? Which is the lie? They tell you at the back, and give lots of source notes for the stories so you can do your own research. They also include a few words about how to tell truth from lie when reading articles online and in the paper. It’s like a guide to finding facts in the news world:
Keep those tips in mind because in a minute we’re going to play an interview game called “Two Truths and a Lie” with authors Laurie and Joan. The rules are simple: I’ll ask three questions. They will each give two true answers and one lie. See if you can determine which ones are the lies (answers at bottom of post).

But first, an introduction.

Archimedes: Hi Laurie. Hi Joan. I gotta know, do you listen to the NPR show, “Wait, Wait Don’t Tell Me”? It’s a bit like your book, but in that show the panelists present 2 lies and a truth.

Laurie: Neither of us had heard “Wait, Wait” before we started working on this book, but now it's one of our favorite podcasts! Yes, it was partially because there is so much really weird but totally true stuff out there, and partially because of all the fake but believable stuff we were seeing, too.
Joan: That’s right! The true stuff we were seeing was so unbelievable that it seemed like a ready-made challenge in believability. Would people be able to tell the difference?

Archimedes: Okay, let’s get started. Remember, readers: each author will give one fake answer and your job is to figure out which one it is.

Question 1: While working on this book, what is the most interesting researching experience you had, the weirdest interview, or most bizarre way you discovered a fact?

Laurie: There were so many, but one of my favorites is when I was looking for a specific article from Life magazine in 1945. I had scoured all of the online databases and couldn't find it. I was working from home, still in my pajamas, and decided to email the reference librarian at my local library to see if they had the issue I needed. Within five minutes I received a reply that they did have it... and an offer to photocopy the article I needed and send it to me! I told her what pages I needed, and within 10 minutes I had a PDF of the full article in my inbox. I hadn't even left the couch, and a thorny research problem was solved for me in 15 minutes. I LOVE librarians, and I LOVE King County Library System!

Joan: One of the most out-there interviews I had was with a curator at the Boston Atheneum. I was researching books bound in human skin and the Atheneum holds one in their collection. In the end, we decided to cut this article from the final book—since we are pointing students to online research, this was not a topic we wanted to spotlight!—but that interview certainly was fascinating and revelatory.

Question 2: Tell me about your daily writing routine.

Laurie: I'm not a morning person, so contrary to popular advice I tackle all of the distracting, smaller jobs first (with coffee!). Then, I take a short lunch break (usually a caprese salad). Finally, I'm ready to dive into an afternoon of focused writing time.
Joan: Most people might not know this, but I’m actually a highly advanced android—I know I look like a regular human, but in reality I don’t need to sleep, ever! (Or eat, but of course I do that anyway. Food, amirite??) For this reason, I can work equally well at any time of the day or night. For that reason, my routine can be a bit boring—but there’s lots of time for researching fun facts!

Question 3. Tell about how you came to be a writer - or at least think of yourself as a writer - and why nonfiction?

Laurie: I was a software engineer until I had kids, then I decided I wanted to stay home with them. In my spare time while they were napping, I wrote a program that would read to them so my husband and I wouldn't have to read the same book 42 times in one day. Once that was up and running, I decided to see if I could build on what I had to make it write, too. It took awhile, but eventually it worked! Computers are very logical and like information, so getting them to write nonfiction wasn't too difficult. I haven't quite worked out the kinks with fiction yet, though. It still feels a bit too... robotic. Stay tuned!

Joan: I actually am a fiction writer—originally, the idea of writing non-fiction intimidated me. We had first thought that I would write the fiction stories and Laurie the non-fiction ones. Once we got started, though, we both found we enjoyed writing the opposite of what we were used to. For myself, the amazing and unbelievable non-fiction stories were the ones which had first sparked the idea for the book—and those have been by far the more enjoyable to write.

Stops on the Blog Tour:

Posted by Sue Heavenrich at 12:30 AM
Email ThisBlogThis!Share to TwitterShare to FacebookShare to Pinterest
Labels: animals, author interview, plants, science for kids