Last week I reviewed a couple books for junior space-cadets. 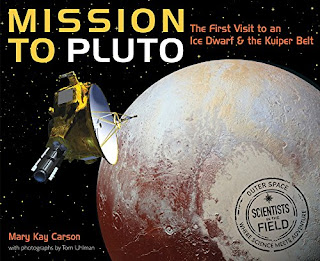 Today we're headed to outer space with scientists in the field.


This addition to the Scientists in the Field series goes boldly where no person - or spacecraft - has gone before! (click here for appropriate music)


Mission to Pluto: the first visit to an ice dwarf and the Kuiper belt (Scientists in the Field)
by Mary Kay Carson; photos by Tom Uhlman
80 pages; ages 10-12
Houghton Mifflin Harcourt, 2017

It takes a lot of work to get to Pluto: teams of scientists and engineers, mission control specialists who keep your vehicle on track, and time. Nearly ten years of time - even if your spacecraft is tiny. That's why the folks at NASA had to build a craft that was durable, and could take care of itself.

In 2005, when they were building the New Horizons spacecraft, engineers knew it would need a power source. Solar panels make electricity for most satellites and space probes, "but a sunny day on Pluto is about as bright as twilight on Earth," writes Mary Kay Carson. So New Horizons carried its own power source: plutonium.

The whole craft is about the size and weight of a grand piano (1054 pounds) to allow it relatively "speedy" travel. Even so, scientists knew it would take more than nine years to reach Pluto, so they programmed in a hibernation mode to save on power.

New Horizons reached Pluto in July of 2015 - when it took samples of atmosphere as well as lots of photos and sent them back to Earth. But the mission was not finished. Right now, the New Horizons spacecraft is on its way to the Kuiper belt - a band of rocky and icy objects out past Neptune. Scientists believe the Kuiper belt has more than 100,000 miniature worlds with diameters larger than 62 miles. Some of these "dwarf planets" are nearly the size of Pluto.

Once it reaches the Kuiper belt, New Horizons will fly by KBO ( Kuiper Belt Object) MU69. Scientists want to know what sorts of rocks and ice a Kuiper belt object are made of, and whether they have moons. The projected arrival date is sometime in 2019. But New Horizon's journey won't stop there - it will keep on going (like a certain bunny), and sending information and signals to Earth until its plutonium runs out.

Author Mary Kay Carson captures the excitement of space discovery in her stories about the scientists and the spacecraft. She includes plenty of graphs and illustrations, as well as 2-page "Mission Briefs" that detail specific aspects of the Mission to Pluto. Back matter includes a glossary and resources for learning more about New Horizons, Pluto, and KBOs.

Today is STEM Friday! Drop by STEM Friday blog for more science books and resources. Review copy provided by the author.
Posted by Sue Heavenrich at 12:30 AM
Email ThisBlogThis!Share to TwitterShare to FacebookShare to Pinterest
Labels: adventures, planets, scientists-in-the-field, space