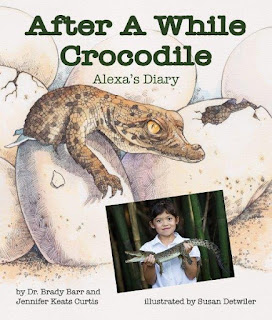 With a mix of illustrations and photos, this book tells the story of the life of Jefe, a young crocodile. Alexa and her friends are raising crocodiles as a special conservation project.

April 5, writes Alexa: "My little cocodrilo gazes up. He opens his mouth. 'Wanh. Wanh. Wanh.' He looks and sounds like a baby dinosaur." Over the next three months, Alexa documents Jefe's development. She tells how you can differentiate a crocodile from an alligator. And she explains why crocs are so important - they're a keystone species.

While filled with croc facts, the book is a fictional portrayal of a real program in which Costa Rican schoolchildren raised American crocodiles in their classroom. The conservation education program was designed for rural elementary students who lived near rivers. There's lots of good back matter: activities, further investigation, and more about the conservation program. You can find a teacher's guide and activities at the Arbordale website. 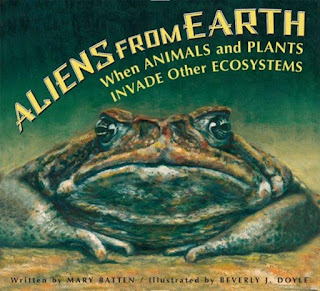 Aliens are everywhere, begins this book. You can probably find some in your own back yard. "Aliens" refers to plants or animals that invade another ecosystem. They are also called "invasive species".

Some of these aliens are introduced intentionally, like when settlers in Australia introduced rabbits and foxes for sport hunting. Today Australia has more than 500 million rabbits that are eating plants, destroying topsoil, damaging crops, and wrecking native habitat.

Closer to home we have gypsy moths, brought to the US in 1869 to use in breeding a new kind of silkworm. But some of the moths escaped and, without natural predators, the population exploded. Now the caterpillars destroy more than a million acres of forest every year. At the back the author lists things you can do to stop the spread of invasives.