Call of the Osprey 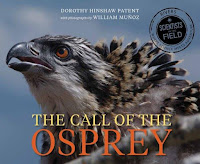 The Call of the Osprey
by Dorothy Hinshaw Patent; photos by William Munoz
80 pages; ages 10 & up
Houghton Mifflin Harcourt, 2015

This is another in the brilliant "Scientist in the Field" series. Patent and Munoz focus their sights on University of Montana scientists studying a pair of Osprey they have named Iris and Stanley. The book opens with the team fixing a bird camera prior to breeding season.

Bird cams are wonderful inventions - you can check some out here. Every spring we watch a pair of red-tailed hawks that nest up at Cornell University. The cameras, located close to the nest, allow us to watch the eggs hatch, the parents feed nestlings, and first flights. But I never thought about the work that goes into placing and maintaining the cameras.

Like "our" red-tailed hawks, the U of M osprey nest high in the tops of dead trees. Or on light posts - wherever they can find a platform to build their nests.

Each fall, the osprey head south, and each spring they return from their winter home in Belize. The osprey nest along rivers, as they are fishing birds. They are well-adapted to that life, with rough spines on their feet that allow them to hold onto their slippery, flopping prey as they fly back to the nest. Osprey don't have many enemies - except for nest predators - and they're pretty tolerant of human activity. The biggest danger they face comes from loss of habitat and environmental contaminants.

Whatever chemicals - insecticides, herbicides, petroleum products - end up in the environment eventually get washed into the river. Whatever gets into the river gets into the fish. And whatever gets into the fish ends up in the osprey, whether it's DDT or heavy metals. So, as the scientists band the osprey, they collect samples of blood and feathers. They also spend a lot of time removing plastic baling twine from the nests. Unlike jute baling twine, the plastic doesn't degrade, and chicks can get tangled up in it, strangled, and die. There's a sobering photograph of twine they removed from a single osprey nest - stretched out it measures a quarter of a mile!