Postcards from Space? That's Impossible.... Or is it? 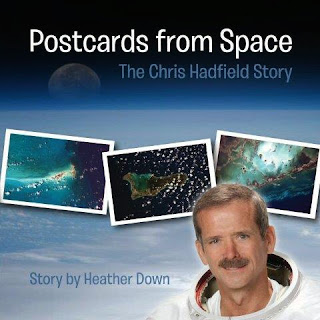 "Some people say Col. Chris Hadfield is the coolest astronaut ever," writes Heather Down. He's walked in space. He commanded the International Space Station. He made tons of videos and even wrote postcard from space.

OK. Maybe not postcards. I mean, there's no post office in space. But he has sent hundreds of photos of the earth as seen from the Space Station... and those are almost as good as postcards.

This slim paperback combines some of Hadfield's awesome photos with snippets of his life in a short biography of a modern day spaceman. Hadfield knew from a young age that he wanted to be an astronaut, so he worked hard to make his dream happened. He played with math and science, learned to fly planes and eventually became a test pilot. He also played guitar and skied. In 2012 he went on his third mission into space. He had lots of work to do: experiments to conduct; repairs and maintenance on the space station; and keeping up with physical training - because muscles and bones can become weak in zero gravity.

One thing Hadfield did was to take photos and share them with people on earth. (The book has lots of those photos, but unfortunately they don't have captions.) He also made plenty of videos about science things in space, such as whether tears fall and what happens when you try to wring out a washcloth. He even made a video about brushing teeth in space. The best thing he did, though, was help us see how cool space is - and how much there still is to learn about this final frontier.

Here's how to make a peanut butter and honey sandwich (and lots more videos).

And check this site to see some of his best "postcards" (because we know there really isn't a post office aboard the space station - not even one on a satellite).
And if you're really interested in learning more about Hadfield and the things he learned while training as an astronaut and living in space, check out his hot-off-the-press autobiography, An Astronaut's Guide to Life on Earth. It's a bit thicker - almost 300 pages - and a whole lot heavier, but that's gravity for you.

Today is STEM Friday - head over to the STEM Friday blog to see what other people are talking about in science, technology, engineering and math. And if you're looking for more space stories, head over to Sally's Bookshelf to read about an earlier space hero, John Glenn. Review copy of Postcards From Space provided by publisher.

Posted by Sue Heavenrich at 12:30 AM
Email ThisBlogThis!Share to TwitterShare to FacebookShare to Pinterest
Labels: space