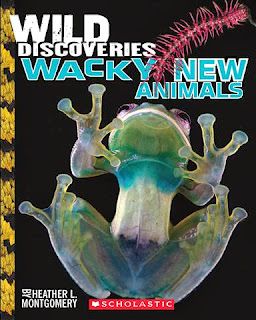 I can't pass up a book with a frog on its cover - especially one this unusual. It's a Condor Glassfrog from a forest high on an Ecuadorian mountainside. And it's a new species - at least "new to us". Because, while it's been around for years decades centuries, scientists only "discovered" it within the last half-dozen years.

Heather Montgomery gives us a round-the-world tour of new animals (and a couple non animal species) discovered between 2007 and 2012.  For each, she includes its scientific name (genus and species) - the Latin label that allows it to be identified by scientists no matter what language they speak when they order take-out. She also lets us know its role in nature (carnivore, decomposer) where it was found, how big it is, and a little about its life or behavior.

There's a brilliant pink Dragon millipede, a cat-sized Titi monkey, a 7-inch long crayfish with hairy antennae, and a Pygmy seahorse that measures a half inch. Scientists have bestowed some of their new discoveries with humorous names: "Tarzan chameleon" for a chameleon that climbs trees; "pancake batfish" for a fish as flat as a pancake; and Spongiforma squarepantsii for a brand new fungus that resembles... a sponge. Every now and then Montgomery tosses in a magnifying glass icon with an "unsolved mystery" question.

Heather was kind enough to answer three questions about her new book.

Archimedes: What drove you to write this book?

Heather:  While researching other projects I had been corresponding with several scientists who had discovered new species of insects. I became fascinated with the process of discovery and wanted to write a book that followed an entomologist and his team through the process. When an editor at Scholastic asked me for a proposal I realized that a long narrative was not the right approach for that kind of book. I began digging, and digging and discovered a vast number of organisms being discovered (even on a daily basis!) and decided to approach the topic by using an abundance of examples. When I found things like a hot-pink millipede and slime-spewing worms which had never been known to science, I knew this would be "wacky" examples to illustrate the diversity of life.

Archimedes: Can you describe how long it took & the kinds of  research you did?

Heather: I LOVE research! For this book I read extensively - many, many news releases and scientific papers. I interviewed many scientists, by phone or email - they were exceptionally helpful! Unfortunately time and resources prevented me from visiting the amazing places on the planet where these animals were found (miles deep in the ocean, high in the cloud forests of South America,...) -- except for one peaceful creek where a bottlebrush crayfish was recently discovered. That creek happens to be about an hour away from my home. In my many paddling trips via canoe or kayak, how did I manage to miss discovering that 11-inch, blue-blooded beauty?

Archimedes: What new animal discovery surprised you the most?

Heather: That's kind of like asking a parent which is their favorite kid.  A see-through frog, the longest insect in the world, a worm that eats whale bones, and a 2-foot monkey that no one knew about?!?! But, if I had to pick, it wouldn't be a particular animal - but instead, the fact that animals that live basically in my back yard have never been described by scientists. That blows my mind!  It makes me want to get outside and see what I can find!

OK eco-explorers...  let's head outside and see what new animals - and plants - we can discover. Even if they are just "new to us".
Check out other cool science posts and STEM resources over at STEM Friday. Review copy provided by the author.
Posted by Sue Heavenrich at 12:30 AM
Email ThisBlogThis!Share to TwitterShare to FacebookShare to Pinterest
Labels: animals, author interview, book review, scientific discoveries