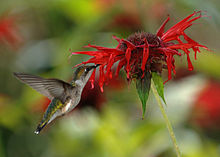 This has been the week for birds! Every morning I am awakened with a symphony of bird song. The phoebes, nesting beneath my study window, spend their days hunting insects on the wing. And at the beginning of the week I was buzzed by a Ruby-throated hummingbird. It was a male, so bright he shimmered like a jewel. After buzzing my hat he perched on a fence post and eyed me. Determining my lack of nutritional value, he zipped over to the onions in flower (left in garden from fall) - I wonder what onion nectar tastes like?

Cornell Lab of Ornithology has a great collection of sounds. Here's some of the hummingbird sounds you can listen to: http://www.allaboutbirds.org/guide/ruby-throated_hummingbird/sounds

Meanwhile, the baby hawks have quickly grown into that gawky teenage stage where they're ready to go to the mall but not sure they want to sit in the driver's pilot's seat. This week looks like "fledge" week up at Cornell... on Monday one hawklet spent the afternoon standing on the edge of the ledge testing his wings. Like kids everywhere, when mom comes home from her errands, they try to snuggle under her wings! It's a tight fit, as you can see from this video:

By Wednesday two of the young hawks had tried out their wings. Today might be the day hawk chick #3 heads out for a test flight. What's going on in the lives of the birds outside your window?
Check out other STEM Friday posts here.
Posted by Sue Heavenrich at 12:30 AM
Email ThisBlogThis!Share to TwitterShare to FacebookShare to Pinterest
Labels: birdcam, fledglings, red-tailed hawk, Ruby-throated hummingbird