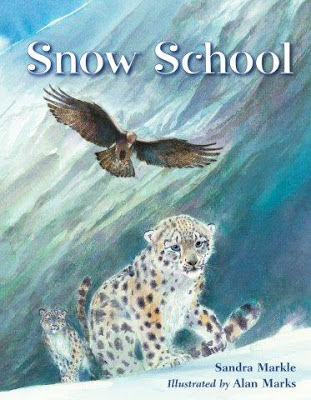 Only the hardiest plants grow high on the slopes of the Hindu Kush Mountains in Pakistan. It’s a harsh place, where snowflakes dance in the wind, even in May. This is where Sandra Markle takes us on her newest adventure – to spend a year with twin snow leopard cubs.

Like any cat, big or little, snow leopard babies need to learn how to survive in the wild. Their mother teachers them important lessons: how to not get eaten by eagles; how to mark their hunting spots; how to stalk and pounce and kill their dinner.

I like the way Markle structures her story around these lessons - it brings us right into the lives of a snow leopard family. One thing I noticed is that snow leopard cubs stay with mama for a long time.

Sandra: That’s right. In such a harsh habitat, raising young cubs is a two-year job. So females who are raising young don’t breed every year. They have their babies in the spring – May or June – a good time because it’s warmer and when the female has to leave her cubs to hunt, she’ll find food more quickly and can then return to guard and nurse her cubs.

Archimedes: As part of your research you watched videos and talked to scientists. Did you ever get to watch a snow leopard?

Sandra: I love it when writing my books gives me an excuse to get close to wildlife and watch them in action. That didn’t happen while working on Snow School – I was living in New Zealand at the time there weren’t any zoos with snow leopards close by. But even scientists who study snow leopards have a hard time seeing them in the wild. Dr. Tom McCarthy, the snow leopard expert I interviewed for this book, said that the cats are now so rare and the terrain so rugged that he went seven years without spotting a single snow leopard!

Now I’m back in the US and have a chance to go visit snow leopards at the San Diego Zoo. And I’d like to suggest to parents that, next time they go to a zoo, they take along a book about one of the animals that lives there. Read it aloud at the zoo – and then imagine that you are scientists trekking into the wilds to see that animal up close.  With your child, think of three things that story makes you want to discover about the animal.

Archimedes:  What inspired you to write this story?

Sandra: When I watched some footage of a snow leopard hunting in the wild I wondered, “How in the world do snow leopard cubs grow up and learn how to survive in their rugged mountain world?”

Archimedes:  What is the biggest threat to snow leopards? And what can we do to help?

Sandra: The biggest threat is people trying to make a living and raise their own families in the same rugged part of the world as the snow leopards.  The nomadic yak-herders need to make money, and snow leopards sometimes attack their herds if other prey is scarce. So an organization, Snow Leopard Enterprises, trains the local people and provides them with equipment to make beautiful items using wool from their livestock. The Snow Leopard Trust purchases these handmade items and sells them through their online store.  In order to participate, the herders must agree to protect the snow leopards and other wildlife living in their area – but they also learn how to keep their livestock safe from leopard predation.

You can read more about snow leopards at Sandra’s blog. And check out what other people are posting on STEM Friday. Review copy provided by publisher.
Posted by Sue Heavenrich at 12:30 AM
Email ThisBlogThis!Share to TwitterShare to FacebookShare to Pinterest
Labels: animal adaptations, animal behavior, animals, author interview, book review, STEM Friday