A couple weeks ago I was digging up potatoes and found lots of worms. One was so big I thought at first it was a skinny snake! As noted a couple weeks ago, worms are good guys in the garden: they help aerate the soil and break down plant material so it decomposes. 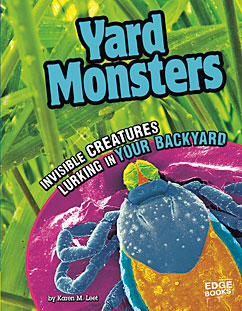 Worms aren't the only garden soil dwellers that help turn dead leaves into nutrients for plants. There's a whole bunch of "yard monsters" that are too small to see. Trillions of them. All at work in your yard right now - at least according to Karen Leet. She would know; she wrote an entire book about them.

There are fungi and bacteria, spider mites and compost critters. She's even got a chapter titled, "poop, pets, and pests"! While some of these too-small-to-see creatures are helpful, others are downright dangerous, disease-causing dirt-dwellers. 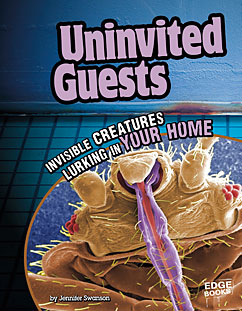 Invisible creatures don't just lurk in your yard - they hang out in your home, too. Jennifer Swanson writes about uninvited guests you might find in your kitchen or bathroom, in your bedroom and even living in your carpets. From bread mold to carpet beetles, from fleas to bed bugs she'll have you re-thinking your aversion to vacuuming - not to mention scratching your ankles.

These two books are part of Capstone's new "Tiny Creepy Creature" series. Two other books, Food Intruders and Body Bugs round out the set. They're written with third and fourth-graders in mind, but at a level that will interest older children. Each book manages to cram a lot of useful info and close-up photos into 32 pages.