Stars Falling Out of the Sky 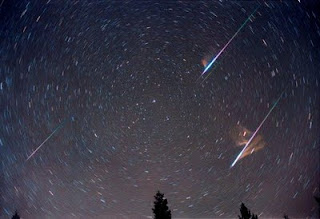 This summer the Perseid shower is going to be hard to see because the full moon will obscure all but the brightest meteors. Don’t despair, though – according to the EarthSky folks there will be stars falling out of the sky for the next two weeks while the moon is dark.
OK – not real stars falling out of the sky, but meteors – small bits of rock bits from crumbling comets or other space debris that streak through the atmosphere as they speed earthward. Some of them move at a mighty clip, a couple hundred miles per hour or faster. Most of them burn up before they hit the ground, but in 1982 a 6-pound meteorite hit a house in Connecticut.  Scientists figure it was traveling more than 1,000 miles per hour.
One of the biggest dents left by a meteorite is in Winslow,Arizona. About 50,000 years ago a chunk of asteroid traveling 26,000 miles per hour collided with the earth. It left a crater nearly one mile wide and more than 500 feet deep.
Most meteorites are small, leaving only a streak in the sky. From now through August 4 you’ll have a chance to see a few, maybe 15 to 20 an hour. Though they come out of the southern sky, near Pegasus, they’ll arc across the sky so you should be able to see them even if you can’t find the constellation. Best sky-watching time is between midnight and dawn.
Posted by Sue Heavenrich at 2:29 PM
Email ThisBlogThis!Share to TwitterShare to FacebookShare to Pinterest
Labels: meteor showers, shooting stars