How Much does a Snowflake Weigh?

correction added Feb. 15, 2011*
One snowflake doesn’t weigh very much – but after awhile all those feathery flakes add up. Ten inches of snow covering an acre of land weighs about 226,000 pound. That’s more snow than you’ll shovel … but the next time a thick layer of white stuff piles up, think about the weight of all the snow you have to clear off the sidewalk.

If there’s a layer ten inches deep, and you clear a sidewalk that’s five feet wide and 50 feet long, you might be lifting and tossing as much as 1300 pounds of snow. Shovel your neighbor’s walk and you’ve lifted a ton or more. After a work-out like that, who needs weights?

Someone who measures such things determined that an individual snowflake weighs 0.02* grams. At that weight it would take 50 flakes to make a gram. For comparison, a Hershey’s kiss weighs 4.7 grams – equal to about 235 snowflakes. There are about 95 kisses in a pound. Using the kiss-to-snow crystal calculator that comes to 22,325 snowflakes/pound.
*this would be the heaviest end of the spectrum. Most are much lighter, weighing from 0.001 to 0.003 grams.
In reality, it’s hard to measure the weight of a snowflake. For one thing, each snowfall is different. Some snow is light and fluffy, and some is heavy and wet. That’s due to the water content in the snow, which is related to the temperature high in the clouds where the flakes began forming, and the temperature of the air they fall through.
The only way to really measure the weight of snow is to let it melt, and then weigh the water. Find a container you can use as your snow-measuring scoop – we use 2-cup deli containers (and the lids). Next time snowflakes fall, go outside and collect a bunch of the fresh stuff. Put a lid on the top (so it doesn’t evaporate) and let it melt. Then weigh it.
You can keep track of the type of snowfall and how heavy it is through the rest of the season. Does spring snow weigh more than winter snow?
Another thing you can investigate is whether old snow weighs more than fresh snow. Or snow that’s been compressed under a snowbank.
Posted by Sue Heavenrich at 3:07 PM 3 comments:
Email ThisBlogThis!Share to TwitterShare to FacebookShare to Pinterest
Labels: weighing snowflakes, winter activities

The northeast has had its share of snow this winter. Where does all this white stuff come from?

A snowflake starts as water vapor that condenses on a dust particle. At cloud temperatures of 23 degrees F, the water vapor begins to form ice crystals. As long as the cloud remains supersaturated with water vapor, the crystals grow. When they get too big and heavy, gravity takes over and the crystals fall toward earth.
Air temperature determines the basic shape of the snowflake, and th4e degree of saturation in the clouds determines how fast the crystal grows. Snow crystals tend to grow larger and faster when the air temperature is higher and there is a lot of water vapor.  Lower air temperatures and less water vapor means smaller snowflakes.
Though each snowflake is unique they generally reflect six-sided symmetry. Here are some of the typical types of snowflakes:
Go outside next time it snows and take a good look at the flakes that are falling down. And if you need an expert flake guide, check out Ken Libbrecht’s Field Guide to Snowflakes (2006, Voyageur Press) or check out his website, Snow Crystals. He’s got lots of flake photos online, and even some advice on making snowflake fossils.
Posted by Sue Heavenrich at 7:04 PM No comments:
Email ThisBlogThis!Share to TwitterShare to FacebookShare to Pinterest
Labels: how snowflakes form, science for kids, snow flakes

It's been so cold these past few days that the marker in the back-porch thermometer has frozen permanently somewhere south of 23 degrees F. That translates to -5 degrees C which, when you read it, looks way colder than it really is.

But still, too cold for the icicles to melt. Or the snow, which keeps piling up.

On the positive side, these temperatures are perfect for freezing soap bubbles. If you've got some bubble mix left over from the summer, go outside on any day when it's below 32 degrees F (0 C) and try this: blow a bubble and then catch it on the bubble wand. Wait a few moments while it freezes - it should turn into a crystal ball before it shatters.

If you want to watch icy crystals form, dip a large loop in the bubble solution - but don't blow a bubble. Instead, watch the crystals grow. They should form a lattice structure.
Posted by Sue Heavenrich at 2:33 PM No comments:
Email ThisBlogThis!Share to TwitterShare to FacebookShare to Pinterest
Labels: freezing soap bubbles, hands-on science

Nonfiction Monday: Under the Snow 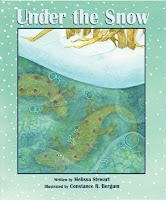 Under the Snow
By Melissa Stewart, illustrated by Constance R Bergum
32 pages, for ages 4-8
Peachtree Publishers 2009
Winter seems like a quiet time. Except for the birds at the feeder – and the squirrels crouched below, waiting for the cascade of rejected millet as the chickadees pick through for sunflower seeds – there’s little activity outside.
But there’s a lot going on under the snow, and Melissa Stewart takes us on a wintry field trip in her lovely book, Under the Snow. This book offers a lyrical tour of habitats and the animals that live there in the winter. You’ll meet ladybugs snuggled into a crevice in a stone wall and a meadow vole that nibbles bark off a tree trunk for mid-winter snacks. In my garden the voles simply tunnel under the mulch and snack on the rutabagas I forgot to harvest…
Stewart, along with Bergum’s wonderful watercolors, introduce us to the secret world of insects sleeping beneath the snow, the wood frog beneath leaves, a woodchuck snug in his burrow. They also show us the slow-moving bluegills and carp in the pond, under the ice.
My favorite spread is red-spotted newts dodging and darting just below the ice. Now I want to go down to the neighbor’s pond and clear off the ice to see whether the newts are swimming there. As soon as it stops snowing, of course.
“Many authors have written books about hibernation,” Stewart writes on her website. “But I wanted children to know that many animals stay active all winter long – even under the snow.” You can read more about how she wrote the book at her blog.
This post is part of the Nonfiction Monday Round-Up hosted this week by Tales from the Rushmore Kid.
Posted by Sue Heavenrich at 9:35 AM 4 comments:
Email ThisBlogThis!Share to TwitterShare to FacebookShare to Pinterest
Labels: nonfiction monday, under the snow 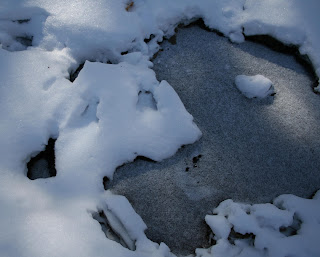 Ice is slippery because of the way the ice crystals on the surface behave. Tiny ice particles (molecules) on the surface move back and forth very fast. This constant vibration makes the top layer of ice crystals act like a thin liquid, reducing friction between an object and the ice. Great for hockey pucks. Not so good for people walking on a sidewalk.
The colder it gets, the stickier ice gets. That means there’s more friction between an object and the surface of the ice. But the highway departments in our area don’t wait for the temperature to drop. Snowplows head out at all hours of the night spreading a mixture of sand and salt to increase friction – and help melt the ice on roads.
Up on our hill we spread wood ashes on the road. Not only do they give traction, but if it’s a sunny day the areas covered by the dark ashes melt faster than the ice without ashes. We sprinkle sand or kitty litter on the steps to our house.
What can you use to increase the friction – lower the slipperiness – of ice on your driveway?
First you need an ice patch to experiment with. Then try sprinkling different things across the surface to help your feet get a better grip. If you have some old beets from the garden, try beet juice – some communities are using beet juice instead of salt to help melt ice.
You also need a way to test slipperiness. Find something that slides across ice well, such as a hockey puck or flat-bottomed microwave container filled with dry beans. Now figure out how you can launch it across a patch of ice so that each test is the same. You might create a short ramp and let your puck slide down the ramp and onto the ice. Or you might devise a slingshot that launches the puck across the ice (make sure you pull it back to the same launch line each time). You also need a way to mark where the puck stops.
Test your experimental design a few times with nothing on the ice, and then sprinkle your “slip-stopper” on the ice and see how far your puck slides.
Posted by Sue Heavenrich at 8:06 PM 2 comments:
Email ThisBlogThis!Share to TwitterShare to FacebookShare to Pinterest
Labels: hands-on science, ice, winter
Newer Posts Home
View mobile version
Subscribe to: Posts (Atom)
Powered by