Dragons in the Sky

Dragonflies zip above my hayfield, stitching together pieces of the sky. They’re busy, hunting down gnats and mosquitoes, but every now and then one stops for a moment, perching on a seedy head of grass or a flower.

Hunting gnats is tough – how does one see those tiny pesky things while flying 20 to 38 miles an hour? The key for dragonflies is their compound eyes. Each eye is made up of as many as 30,000 six-sided facets. Those eyes can detect motion as far as 65 feet away. Watch out mosquitoes!

A few years ago some scientists tethered dragonflies in a wind tunnel and took photos of their wings in flight. They discovered that dragonflies twist their wings on the down stroke, creating an airflow that generates enough lift to keep 15 – 20 times their weight in flight. Wouldn’t it be cool if aircraft could do that? You can bet some engineers are already on that.

Spend some time watching dragonflies this summer. You can help scientists learn more by becoming a "citizen scientist" for Dragonfly Pond Watch. 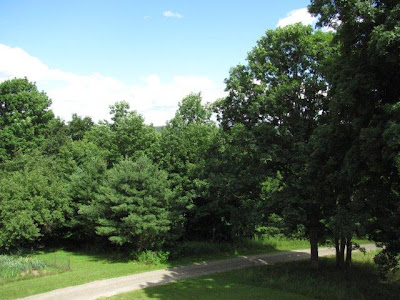 Posted by Sue Heavenrich at 12:30 AM No comments:
Email ThisBlogThis!Share to TwitterShare to FacebookShare to Pinterest
Labels: seasonal observations, Tuesday view 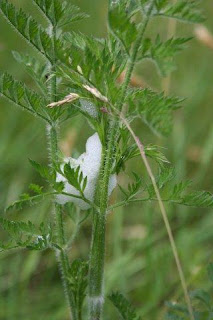 Ever notice foamy white spitballs clinging to some of the tall grass and plants in the “less-mowed” section of your yard? It’s a spittlebug, a baby “froghopper” that’s making that froth.

Spittlebugs are true bugs, like aphids and other sap-sucking homoptera that stick their short pointy beaks into stems. But spittlebugs are messy eaters. As they spill sap down their bodies, they add some air and make bubbles. It makes sense: they don’t have hard shells to protect themselves. And the bubbles help keep their skin moist. Besides, who wants to eat a blob of spit?

To see a spittlebug up close, grab a watercolor brush and a handlens. Then head out to the nearest weed patch – or pine tree – and look for the tell-tale blobs of foam. Use the paintbrush to gently brush the spit aside. In there somewhere you should find a tiny green insect with huge eyes and even huger hind legs.

Spittlebugs can churn out 80 spit bubbles in a minute. Want to watch? Using your paintbrush, remove a spittlebug from its home and put it somewhere else on the plant. Then watch. It might take a few minutes for the tiny guy to find the “perfect” place to tap, but when it does, it will start to make foam. Use a watch to time how long it takes to completely cover itself.

Some other spittlebug questions to investigate:

Check out what else is happening at STEM Friday - you'll find book reviews, educational resources and more. 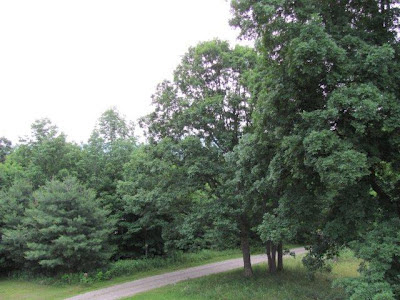 Surrounded by Green
(except for the sky, which is gray)
Posted by Sue Heavenrich at 12:30 AM No comments:
Email ThisBlogThis!Share to TwitterShare to FacebookShare to Pinterest
Labels: seasonal observations, Tuesday view 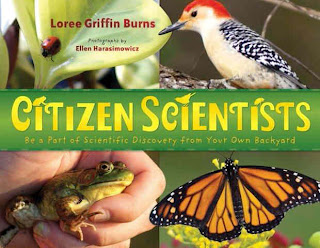 Citizen Scientists: Be a Part of Scientific Discovery from Your Own Backyard
By Loree Griffin Burns; photographs by Ellen Harasimowicz
80 pages, ages 8 and up
Henry Holt, 2012

One summer I got involved in the Lost Ladybug Project. Whenever we could, we headed out to wild and weedy areas in search of the elusive two-spotted ladybug. Along the way we netted – and took photos of – the ladybugs we found, and sent them to John Losey at Cornell. We were part of a “citizen science” project.

So I was thrilled to see that Loree Griffin Burns has a new book out that is devoted to citizen science – things kids and their families can do to help scientists gather information. It’s divided into four sections, one for each season, and each focusing on one kid-friendly project and each jam-packed with luscious photos. Each chapter offers cool tips on collecting data, like how to chill a ladybug so you can take a digital photo (hint: pop it in a freezer for 5 minutes). And she includes interviews with the scientists.

Turns out, Burns has been thinking about a book on citizen science for a long time. When I caught up with her for a quick interview, she said that she first heard the phrase ‘citizen scientists’ in relation to the International Coastal Cleanup (ICC) that she wrote about in Tracking Trash. She was intrigued by the concept of regular people, including children, participating in true data collection.

“Once I started to look for it, citizen science seemed to be everywhere,” says Burns. She decided to focus on four projects that had a national scope and provided lots of online resources for students and teachers. And she also looked for some temporal diversity. “
FrogWatch, for example, takes place at night, encouraging participants to count frogs not with their eyes, but with their ears,” she notes.

Burns participated in all four projects as a citizen scientist… so she writes with the authority of “been there, done that.”  She’s tagged Monarch butterflies, waded hip-deep in vernal pools to listen to frog calls, clicked mug shots of ladybugs and tallied birds for the Great Backyard Bird Count.

Her most interesting adventure happened while visiting Monarch butterfly wintering sites in Mexico. “We reached them on horseback, riding up through a steep, dry forest,” she said. It was so dusty she had to wear a bandana over her mouth like a cowgirl. “At the top, we found millions of monarch butterflies. They coated the trees like massive orange and black capes, bending one pine to the ground. Then suddenly they took off. All of them. Thousands and thousands of butterflies simply lifted up off the tree in a river of color and sound that completely surrounded me.”

That, says Burns, was one of the most incredible things she’s ever seen. Still, sitting in her backyard and recording bees that visit her sunflowers is every bit as fascinating.

One of the most important lessons for Burns was how her definition of the word scientist expanded. “The early part of my life was spent training and earning the credentials I thought I needed in order to call myself a scientist,” she says. “Working on this book reshaped my ideas on what it means to practice science. It doesn’t require a degree on a wall, or a track record of peer-reviewed journal publications. Science is a way of looking at the world, of asking questions, and of finding answers.” And the neat thing, says Burns, is that anyone of any age can do it.

You can learn more about Loree Griffin Burns here. You'll find more cool science books and resources at STEM Friday. And be sure to check out Non-Fiction Monday, too. Review copy of book provided by the publisher. 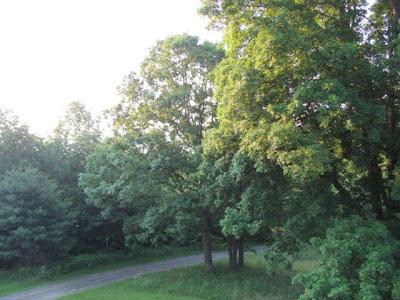 First light hits the hickory and washes out the sky -
another blue and hot day.
Posted by Sue Heavenrich at 1:00 AM No comments:
Email ThisBlogThis!Share to TwitterShare to FacebookShare to Pinterest
Labels: seasonal observations, Tuesday view

There’s a lot of activity outside my window at night; moths wheel and flutter through the starlit sky, sometimes banging against the screen near my desk. I’d like to think they’re curious about what I’m writing, but I know they’re just attracted the light on my desk.

Like their butterfly cousins, moths begin their lives as leaf-munching caterpillars. They eat, grow, shed their skin and, when they’re ready, spin a silk cocoon and pupate.

Like their butterfly cousins, moths have long curling tongues. They travel from flower to flower drinking nectar and picking up pollen on their hairy bodies and carrying that pollen to the next plant. But most moths fly at night, so they’re on the look-out for pale-colored or white flowers like evening primrose and moonflower that glow in the moonlight …  and use sweet scents to attract their mothy pollinators.

Moths have been around for a long time – about 50 million years. During that time some of them have developed special pollinator relationships with flowers, like the yucca moth and yucca flowers.

If you want to study moths, make a light sheet. All you need is an old white sheet, a clothesline, some clothespins and rocks, and a bright flashlight. Pin the sheet to the clothesline so one end lies on the ground. Weight it down with rocks. Prop the flashlight on one side of the sheet so it casts a plate-sized circle of light on the cloth (use phone books to adjust the angle). When it’s dark, switch on the light, and then watch the moths that come to visit.

For more on moths, visit my “Archimedes Notebook” column in Ithaca Child this month. And check out “National Moth Week” – a first-ever event happening July 23-29.

Checking in on the Hawk Chicks

They are chicks no more. After a month of pigeon take-out and chipmunk meals they’ve grown nearly as big as their parents. They’re jumping up and down, stretching their wings, and wandering to the edge of the nest platform as if checking out potential flight plans. These guys look restless and ready to go. Drop by the nest cam and check out the adolescent “I can’t wait to get out of here” hawks.
Posted by Sue Heavenrich at 8:46 AM No comments:
Email ThisBlogThis!Share to TwitterShare to FacebookShare to Pinterest
Labels: fledglings, hawk nest, red-tailed hawk 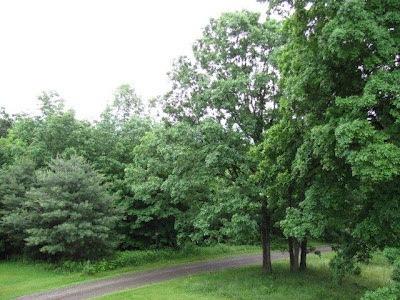 Can't see the hills for the trees....
Posted by Sue Heavenrich at 12:30 AM No comments:
Email ThisBlogThis!Share to TwitterShare to FacebookShare to Pinterest
Labels: seasonal observations, Tuesday view

A couple months ago I noticed a cluster of soil mounds in my driveway. They looked like anthills, but I didn’t see any ants. What I did see: lots of bees flying about.

These are “digger bees” – ground-nesting bees that excavate a series of vertical and horizontal tunnels in the earth. It turns out that 60 percent of the bees in my state of NY are ground-nesting, solitary bees. They might live alone, but they often build their nests in bee villages, or aggregations. Sometimes those villages can be dense, with more than 100 nests in a square yard. Mine aren’t nearly so crowded; there are only 4 to 7 nest sites in a square foot. Perhaps that has something to do with my clay-filled soil and stony hard-packed drive.

They don’t always dig in driveways; some build their nests in lawns or on the banks of streams. Check out your neighborhood. If you are lucky enough to have digger bees living nearby, spend some time watching them. They don't seem to mind being watched. Here's a few questions you might want to ask:

Check out the other STEM Friday posts today... and squeeze in a little time to check out the bees in your neighborhood.
Posted by Sue Heavenrich at 12:30 AM 2 comments:
Email ThisBlogThis!Share to TwitterShare to FacebookShare to Pinterest
Labels: backyard science, hands-on science, native bees, pollinators, STEM Friday
Newer Posts Older Posts Home
View mobile version
Subscribe to: Posts (Atom)
Powered by