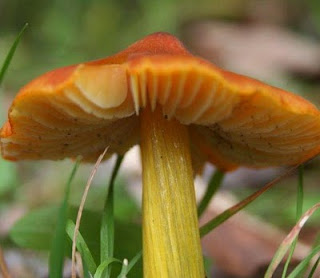 It's almost Halloween - an evening celebrated by ghosts and goblins and things orange: candy corn, pumpkin cookies and jelly beans.

So in keeping with the season I encourage you to head outside with your nature journal and look for Orange Things.

A couple weeks ago I noticed this bright orange fungus. With all our fall rain there was a lush growth of grass and clover beneath it, contrasting green with the bright mushroom cap.

If you're looking for orange leaves, you can't go wrong with Sugar Maples.

Marvin Smith, a photographer and blogger in the Ozarks has graciously shared two of his orange critters. The moth on the flower to the right is called a "lichen moth" because the caterpillars munch on crunchy lichens.

The spider is a   marbled orb weaver -
perfect for Halloween!
Posted by Sue Heavenrich at 12:58 AM 3 comments:
Email ThisBlogThis!Share to TwitterShare to FacebookShare to Pinterest
Labels: colors, fall, nature walk 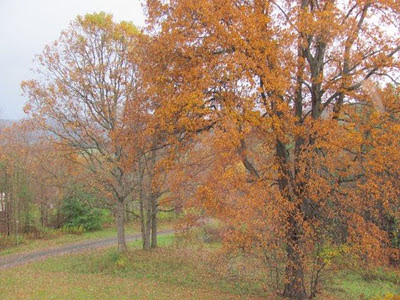 Sunny mornings, rain in the afternoons .... snow predicted on Thursday.
Will these leaves be gone by next week?
Posted by Sue Heavenrich at 8:12 AM No comments:
Email ThisBlogThis!Share to TwitterShare to FacebookShare to Pinterest
Labels: seasonal observations, Tuesday view

Backyard nature-watchers are teaming up with scientists to track the relationships between climate and plants. This isn’t something new – about 60 years ago Aldo Leopold, who observed the plants and birds and insects on his farm, combed through ten years of journals to see how things had changed over time. He found a correlation between temperature and flower blooming.
Later, his daughter moved back to the family farm and resumed nature journaling. When scientists compared her observations to those of her father, half a century earlier, they discovered that over those decades some plants had begun blooming earlier, and some migratory birds returned earlier. Over that same period of time the earth warmed about two degrees.

The study of periodic plant and animal life cycle events is called “phenology”. It doesn't take much to be a "phenologist" - just a pencil, a notebook and a desire to look closely at the world. You can keep track of plants and animals in your back yard. Who knows? Maybe the notes you keep will help scientists in the future. If you're interested in helping scientists collect data for climate research right now, check out Project BudBurst.
Posted by Sue Heavenrich at 5:33 AM 1 comment:
Email ThisBlogThis!Share to TwitterShare to FacebookShare to Pinterest
Labels: climate change, nature journal, phenology 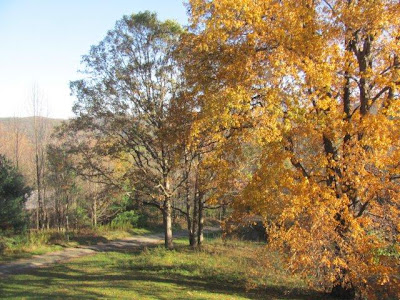 For the past couple decades I've watched the leaves burn scarlet, russet, gold.. and then fade away. I've watched the evening sun paint the far hill with alpenglow and watched snow pile up on the road - all the while thinking: gee, I should document the season's changes. So that's what I'll be doing this year, on Tuesdays - posting a photo of the view from my study window. Starting now, before the last bit of color fades from these gorgeous upstate NY hills. Thanks to Melissa Stewart for inspiring me - this year she's taking cloud portraits.
Posted by Sue Heavenrich at 4:28 PM No comments:
Email ThisBlogThis!Share to TwitterShare to FacebookShare to Pinterest
Labels: seasonal observations, Tuesday view 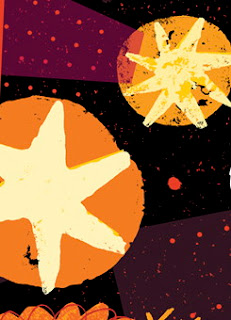 If you missed the Draconid meteor shower last week, don’t despair. Meteorites are continually falling to earth. All day long. The problem is, you don’t see them because most of them are really, really tiny.
But you might be able to catch a few. All you need is a large plastic or aluminum bin (a few inches deep), a magnet and a plastic bag.
Put your star-catching bin someplace high enough so you don’t get Earth dust, but yet easy enough to reach. You’ll want it open to the sky, so avoid overhanging trees. Fill the bin with several inches of water and leave it in place for three or four weeks. Check to make sure there is water in it and add some if you need to.
How long will it take to actually capture a falling star? Give it a month or so. Then bring your container down and set it on a sturdy table. First thing you’ll notice is a lot of sediment in the bottom of the bin. So how do you separate out meteorite bits from dust and pollen?
That’s where the magnet comes in. Put the magnet inside the plastic bag and slowly move it around in the water. Make sure to stir up the sediment on the bottom of the bin. Now pour some water in a clean bowl and put your magnet in that. Take the magnet out of the plastic bag and magnetic meteorite bits will fall into the clean bowl.
Those meteorite bits may have come from the farthest reaches of our solar system. And they may be old – really old, like four billion years or more. So take care of them!
And, if you want to watch stars falling out of the sky this fall, there are still a few more showers coming up. The only problem is that the moon might get in the way of seeing the meteors streak across the sky.
Peak viewing times:
Orionids                      Oct 21
South Taurids              Nov 5
North Taurids              Nov 11-12
Leonids                       Nov 17
Geminids                     Dec 13
Learn more at Earth & Sky
Posted by Sue Heavenrich at 11:03 AM 1 comment:
Email ThisBlogThis!Share to TwitterShare to FacebookShare to Pinterest
Labels: hands-on science, meteor showers 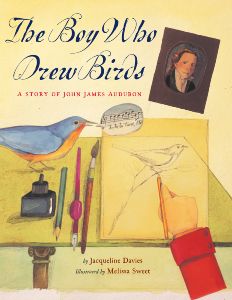 The Boy Who Drew Birds
By Jacqueline Davies; illus by Melissa Sweet
32 pages, ages 7 – 10
Houghton Mifflin, 2004
This book has everything one could want in a sciency book: luscious artwork (I love collage!), mystery, historical context and wonderful storytelling. I was hooked at page one: “It was true that John James could skate, hunt, and ride better than most boys. True also that he could dance the minuet and gavotte as if he had been born a king.” John James, we learn, can fiddle and fence and flirt – but the thing he likes to do best is watch birds.
Even though birds have four legs too few, I had to keep reading. Who is this John James? And what is it about birds that intrigues him so?
But what really hooked me was that the story centered around Audubon’s observations of the eastern phoebe – a bird that, over the past dozen years, we have been watching closely because a pair built its nest just beneath my study window. And, as John James learned, they return spring after spring, with kids in tow.
The mystery is where birds go in winter. We know they migrate, but back in 1804 scientists thought they hibernated underwater. Or flew to the moon. The other mystery is whether they return to their home each spring – a mystery Audubon solved with a silver thread.
We think of Audubon as an artist. But clearly, he was a natural scientist as well – even though he didn’t fare well within the confines of a classroom.
Like Audubon, author Jacqueline Davies was inspired by the phoebe. “I met my first phoebe during a nature walk with my daughter," she says. "I was intrigued by the idea of a bird that returns to the same nest year after year.” When she delved into research, she learned that Audubon was the first person to band a bird in this country and that the bird was the phoebe. That’s when she knew she had to write the story.
Davies read lots of biographies about Audubon, as well his own writing. But she didn’t make it to visit his Pennsylvania home until after her book was published.
During those three months of research, Davies says she learned lots of new things. “The most engrossing,” she says, was reading the scientific theories of Audubon’s day that explained where birds go in the winter. “Those theories offered great insight into not only what they knew but also the accepted practices of the day for making scientific discoveries,” Davies said.

While Davies doesn’t keep a life list, she does keep a pair of binoculars at the ready in her upstairs bathroom. “It’s the perfect spot for watching all the bird activity in my backyard,” she explained.
This is part of STEM Friday, hosted at Celebrate Science. Review copy provided by Tompkins County Public Library in Ithaca.
Posted by Sue Heavenrich at 9:03 PM 3 comments:
Email ThisBlogThis!Share to TwitterShare to FacebookShare to Pinterest
Labels: birds, book review, migration, STEM Friday
Newer Posts Older Posts Home
View mobile version
Subscribe to: Posts (Atom)
Powered by