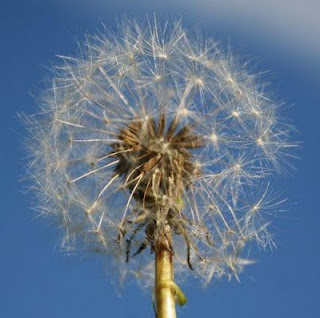 A few things to wonder about dandelions:

Posted by Sue Heavenrich at 8:16 AM No comments:
Email ThisBlogThis!Share to TwitterShare to FacebookShare to Pinterest
Labels: dandelions, seeds

Nonfiction Monday: Seabird in the Forest 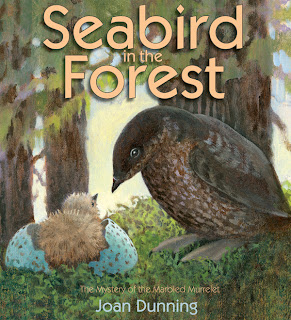 Seabird in the Forest
Written and illustrated by Joan Dunning
32 pages, for ages 5-10
Boyds Mills Press 2011
How does a seabird come to nest in old growth forests miles inland from the pacific? Joan Dunning reveals the secret life of the marbled murrelet, a bird that spends most of its time on the water. But for two months of the year a murrelet pair flies inland to nest, laying a single egg. Once the chick hatches the parents take turns flying back to the sea – sometimes as far as 50 miles – to catch supper.
As Joan writes about the murrelet she also tells about the amazing ecosystem high in the canopy of old growth firs. Hundreds of feet in the air seeds sprout into huckleberry bushes and ferns create thick mats that collect water from the fog. There are flying squirrels, bats, and salamanders that never crawl beyond their home tree – creatures Joan captures in illustrations so layered with depth and texture that you forget for a moment that you’re not actually in an ancient forest.
Earlier this month I asked Joan about the art she created for Seabird in the Forest.  She illustrated her previous books with watercolor paintings. “Initially,” Joan said, “I imagined that I would do this one in watercolors as well, but the paintings seemed too light-weight in comparison to the forest. I wanted to represent the complexity of the canopy ecosystem.” The layers of oil paint allow her to do that. “When I painted the moss of the limb, for instance or the bark of the redwood, I felt like I was creating real moss on real bark. It was a very magical experience.”
Joan paints her illustrations the same size as they appear in the book. Some of the paintings took a few days, she says, while others took weeks. The entire book took about two years to complete.
How did she get her illustrations to look so natural? “I live in a redwood forest,” Joan says. From her work table she looks out on giant trees. “They are second growth - the forest was logged once, but that was about a hundred years ago.  Because the trees get a lot of sun, they are huge and look almost like old growth forest.”
To keep her work authentic, Joan took field trips to true ancient forests. Several times a month she headed to Prairie Creek Redwoods State Park – about an hour from her house. “It’s an excellent place to see old growth forest, salmon, elk and marbled murrelets,” she says. “Every time I enter the forest, I stop and just gaze at the trees because I am never fully prepared for their breath-taking presence. At dawn there is an abundance of marbled murrelets flying overhead.”

You can see some of Joan’s sketches and learn more about her work at her website.  This post is part of the Nonfiction Monday Round-Up hosted this week by Simply Science, A copy of the book was provided by the publisher.
Posted by Sue Heavenrich at 12:19 PM 1 comment:
Email ThisBlogThis!Share to TwitterShare to FacebookShare to Pinterest
Labels: author interview, book review, nonfiction monday, science for kids 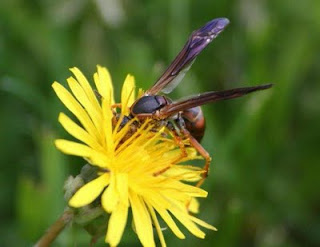 This time of year my lawn is a patchwork of green, yellow and purple. Dandelions and violets blossom, providing food for the insects and beauty for the eye.

Before you mow your lawn this week, grab your journal and a pencil - and a hand lens if you have one - and check out the dandelions in your yard.

Honeybees are busy in my dandelions. They stop briefly, stash a bit more pollen into their already stuffed (and very orange) pollen baskets and then buzz off to the next flower. There are lots of smaller bees, too: bright green bees that are usually as shiny as newly waxed cars but now are dusted with a coating of pollen; tiny gray bees that circumnavigate the outer ring of flowers before diving into the pollen-rich center. And ants, amber colored with long hind legs that, when they chow down, stick their dark butts into the air.

Beetles and "true bugs" (hemipetera) nibble pollen and, sometimes, petals. Thin-waisted wasps dive headfirst into the blossoms, then fly off to the next flower carrying tiny yellow pollen grains on their thoraxes.

Who do you see in your dandelions?
Posted by Sue Heavenrich at 9:45 AM No comments:
Email ThisBlogThis!Share to TwitterShare to FacebookShare to Pinterest
Labels: bees, dandelions, wasps

Frogs are well-designed jumping critters. Some frogs can jump 20 times the length of their bodies, a fact which led my kids to wonder if they were frogs, how far could they leap?

The next obvious question is whether leap distance remains the same over multiple jumps. To determine that we needed frogs and a way to measure. If we had a sidewalk nearby we would have released the frogs and marked each successive jump using chalk. Having the choice of a gravel driveway or lawn, we used bright straws to mark the jumps. You have to move fast if you're following a pickerel frog! Then we could measure the distances and write them down. We never tried it with peepers, but now the woods are noisy with the little tree frogs so this year may be the year to measure peeper leaps.
Posted by Sue Heavenrich at 2:33 PM No comments:
Email ThisBlogThis!Share to TwitterShare to FacebookShare to Pinterest
Labels: measuring frog jumps
Newer Posts Older Posts Home
View mobile version
Subscribe to: Posts (Atom)
Powered by